The Hierarchy of Controls & Workplace Safety from Chemical Hazards 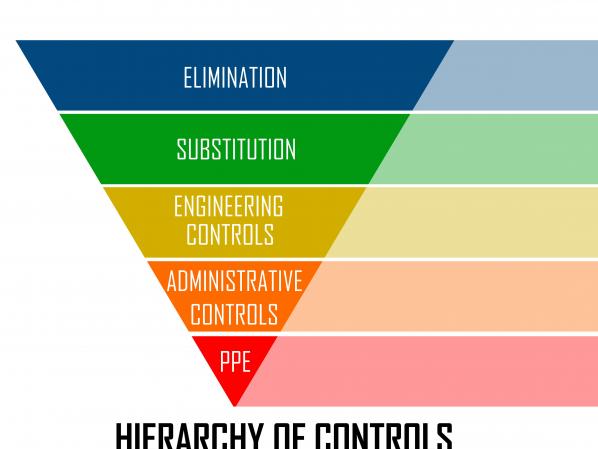 What is the Hierarchy of Control?

How Does the Hierarchy of Control Work?

What Are the 5 Hierarchy of Controls?

The 5 hierarchy of controls are:

Elimination of Chemical Hazards in the Workplace

The next most effective means of control is substitution. Substitution means to replace one chemical for another with lower physical and health hazards.  Finding an effective chemical substitute may take some effort but it is worth the return on worker health.

While Elimination and Substitution are the most effective methods of controlling a hazard, it may not be possible to use either control method. Products that are manufactured or produced in-house cannot be eliminated or substituted. However, there may be some flexibility in the additives used to make your manufactured products. Shop supplies, like lubricants, cleaners, degreasers, paints, or solvents, are often the easiest to substitute.

Engineering Controls protect workers by reducing hazardous conditions or by adding a barrier between the worker and the hazard. There are three general types of engineering controls:

Well-designed engineering controls for hazardous chemicals can be highly effective and be independent of workers actions.

Local exhaust ventilation captures contaminants near the source, away from the worker’s breathing zone, and exhausts the containment outside.

Containment refers to a closed system to contain the chemical hazard like air-tight chemical drums, large storage tanks, or chemical process systems. It usually is used when the physical and health hazards are greater, and releases into the atmosphere are dangerous.

Elevate the level of occupational health standards for your company

The final level in the hierarchy of controls is Personal Protective Equipment or PPE. PPE refers to protective clothing, helmets, eyewear, and ear protection, designed to protect workers from injury, illness, or infection.  Respirators are also considered PPE. PPE can be too quickly adopted before other hazard controls are considered. PPE can be easy to go to but there are serious limitations that put the worker at risk of chemical exposure. Best practices must be followed to ensure PPE is being used effectively.

Administrative controls and PPE both require adherence to rules and significant effort by the worker. As we all know, extra work means shortcuts and resistance, reducing the effectiveness of the chemical hazard control.

Implementing the Hierarchy of Controls for Chemical Hazard Management

The Hierarchy of Controls challenges us to think of better ways of controlling chemical hazards in the workplace. Monitoring the effectiveness of our controls brings the hierarchy full circle. Involving workers in the chemical management process of selecting and implementing controls is a predictor of their success.

If you are looking to elevate the occupational health standards for your organization, get in touch with the experts at Chemscape Safety Technologies today.

Get a free 10-minute video every month on chemical hazards and how to protect yourself. Our monthly newsletter is a great resource for toolbox talks. Get access to our blogs, webinars and resources on chemical management. Sign up for Chemscape’s Insider Newsletter today.